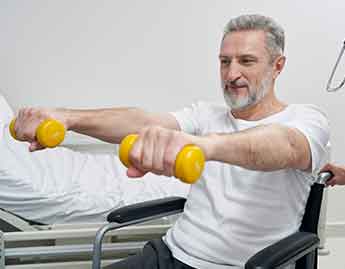 Many physiological changes take place as we age.1Our bodies naturally decline with less use and physical activity. Some of these shifts affect saliva secretion, taste sensation, and the oral cavity (loss of teeth, etc.). However, the most significantly noticeable changes occur in the musculoskeletal system. Lean muscle is lost as more fat is gained. Bone density gradually decreases and conditions such as osteoporosis or osteopenia become more prevalent.1 Many times it’s been observed where an elderly man or woman is “hunched over” walking with a cane, in part, due to these types of changes.

Some examples are the modifications that occur in bone and connective tissue which are primarily due to changes at the cellular level.2 Connective tissue and bone cells are derived from mesenchymal stem cells (MSCs). MSC cells become less proliferative in the aging adult. Consequently, osteoblastic cells become decreased (bone-forming cells), while osteoclasts (bone-reducing cells) become more active. This is of primary significance in post-menopausal females, who secrete less estrogen. Estrogen inhibits osteoclastic activity, and without it, the breakdown of bone tissue is substantially increased.2

Cartilage also undergoes changes throughout the aging process. It decreases in strength and elasticity, as well as thickness.2 The intervertebral discs between the vertebrae of the human spine are made of primarily collagen tissue and consists of an inner portion, the nucleus pulposus and an outer portion called the annulus fibrosis. These components of the disc go through molecular changes that lead to eventual dehydration and breakdown of the disc matrix.2 The disc nucleus is avascular and receives its nutrients from the mechanistically coupled motion of the vertebrae which causes nutrient-dense fluid to flow into the tissue.3 This is a process called imbibition.3 Aberrant loading on spinal joints, commonly seen with aging, can not only reduce this mechanistic action but also stimulate adverse enzymatic activity within the disc matrix, speeding up the process of degeneration.4

In looking at and evaluating a vast number of x-rays through the years, the findings have been widely variable. Two individuals of the same age can present significantly different in that one may have extreme osteoporotic and degenerative changes while the other may have very little to none at all. These differences can most likely be attributed to lifestyle. Healthy living and good nutrition can go a long way for older adults.1 In a documentary regarding plant-based diets called Gamechangers (on YouTube & Netflix) shows a 60-year-old bodybuilder/athlete who is “ripped” and outperforming those much younger than him. This is in large part due to his healthy dietary habits and exercise regimen. This is one proof, among others, that lifestyle can play such a key role in the aging process.1

Biblically speaking, God says in Genesis that mankind has the ability to live 120 years. Genesis 6:3 Then the Lord said, My Spirit will not contend with humans forever, for they are mortal; their days will be a hundred and twenty years.5 Prior to this, people were living several hundred years.5 This means that under normal circumstances, we have the ability to genetically live 120 years. Meaning that biblically speaking 60 is the beginning of middle age.